George and Molly are both well again, George was able to go to a party on Sunday, our daughter was really wanting him to be well enough to go, I love how quickly they both came back to good health. George has gone to loads of parties, most times as the younger brother of Will. This party invitation came from his nursery, a little girl in his group wanted George at her party, our daughter was in tears when George came home with the invite, all we want for our children and grandchildren is inclusion. George is disabled he has Downs Syndrome, he looks different and he's behind in many things compared to all the other children in his group, but he's a little boy who loves a party. The image below is from George's Instagram page, posted by our daughter, it says so much, with so few words. 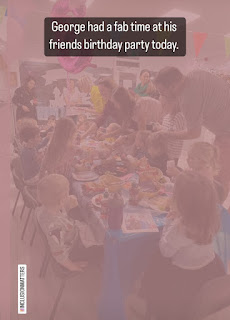 We got the little ones nursery photo this week, we had a huge choice, we had been warned George did not smile in the session, poor Molly has no idea what's going on. So no smiles but a lovely photo. Normally their photo is taken on a blank background, this is so much nicer. 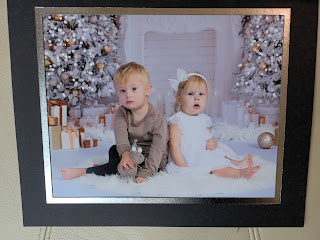 My sewing again has grown, I had Sunday on my own, I was not going to risk doing much, my back is again comfortable but not right. I sat and did cross stitch, finishing the flowers and added a bright blue section. I am desperate to get my sewing machine out, but I know my back will suffer if I do. I have already decided the next two sections to be added, both on this left hand side. 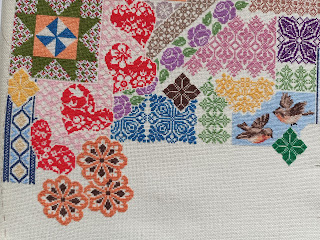 Roses in mid November, these are beautiful to see, our hotlips just keep blooming. After a few dry days, the weather has turned blustery and heavy rain again, it's also much cooler, so I can't see us having blooms in the garden for much longer. 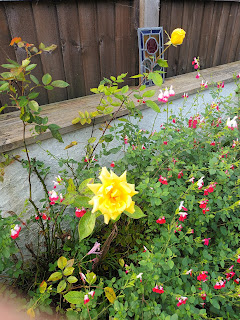 I have had a much better week, I have done housework without searing back pain, just an ache, I have another session booked for tomorrow, I am walking much better, I have everything crossed this is the start of recovery. It has been far to wet to go out or do anything.

Sunday I was going to sort hubby's motorcycle book, but decided to postpone it for a while, originally I thought it would be great for a gift, but he has asked for slippers (I know we are all getting older). So I will start the book another time and instead of it being a surprise, when I think it's done, I will show hubby and get his input.

We have had excitement in our street, my neighbour 2 doors away has been taking legal action again the nasty neighbour in-between, for over a year, recently next door went to court of appeal in London. The Daily mail ran with the story online and on Monday a reporter from the Sun was here, who did the attached piece. Neither us or the neighbour who has been taking the action would speak to the reporter, but other neighbours did, we are now just waiting for the repercussions.