We got this new square plastic pot, the pomegranate plant was not as pot bound as I thought it would be, but this pot will be placed where our large water but is, on the side of the garage, it's a sunny spot so it should do well here. I got plastic because the whole plant and pot is still very heavy, hopefully once in place it should not have to be moved. 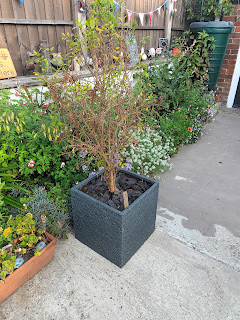 There are still pockets of colour around the garden, the begonia's have been fantastic so far, but the cold weather will kill them off soon, they grow from corns, which I leave in the soil, all are planted in raised section, so the flowers tumble down. Most of the plants returned after the drought, but few are in flower, so we have lots of different shades of green everywhere. 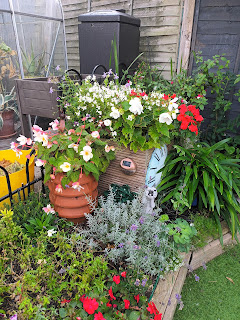 I have done more stitching, I love the flower design on the outer section of the bottom square, I normally finish my thread and then pack my sewing away, yesterday a neighbour popped in, so I did not finish my section. I have now decided how I am going to finish these squares, and I've started to think about what to pop next to them. 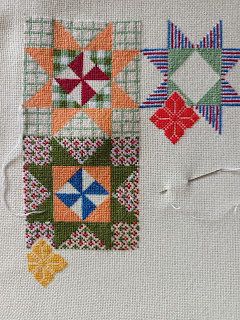 The shed is empty, hubby helped and gave it a good sweep, he place a free ad on our local Facebook page and it was quickly snapped up. Hubby has been out and removed loads of the screws holding it together, it should be collected later today. Removing the shed will not as bad as we feared, it did just fit into the space behind the garage, it had been built from the inside, so everything is accessible. Hubby has also remove the canvas roof to our pergola, he packs it away each winter, stored in the garage in the dry, it prolongs the life of the canvas and keeps it looking good, plus it does flap in the wind.
It's been a busy few days in the garden, it's that time of year when it's easier to do so many jobs, it's much cooler this September, so some jobs are being done now instead of later in the month. I still have 2 pots with gladiola bulbs in I will dig them out and plant loads of spring bulbs, they can be done later in October as the soil in the pots stay a bit warmer. I have one big round pot, which the pomegranate was in, not sure what to use in that pot, it may stay empty for a while.  I also have my old 3 level  tower pots, I need to decide if I am going to use them or pass them on.