Sunday we went to Sammy Miller Motorcycle museum, in the New Forest, it became a family day out. Our boys from Somerset drove up with mummy, Will came with mummy and daddy, who gave me a lift. Hubby and both son's came on their motorbikes. Lovely photo with 3 of our grand sons. 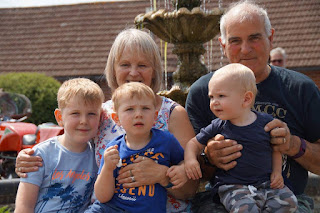 Every little boy, no matter what age, loves a tractor
Logan looking after his young cousin Will 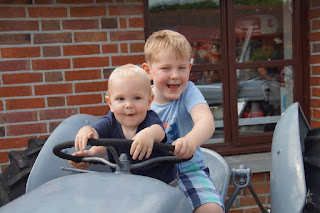 Finn having the most fun 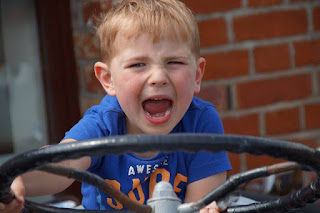 Daughter looking as if she is backing the tractor into parking space,
going back to her roots as she was born in Somerset. 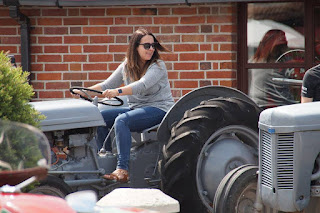 I have never been here before, it was a perfect family day out, there were donkeys and Alpaca's in the fields as we arrived. Next to the play area were chickens, ducks and a couple of turkeys, plus two goats, the play area was perfect for little boys, and all three boys enjoyed time running about.
The courtyard had a huge picnic area, with plenty of seating, with a huge fountain with fish in the middle. There were a couple of crafty shops as well.
We did go into the museum, which was full of all types of bikes, very old to modern, and there were loads of them, plus lots of items associated with motorsport. I walked around with Logan who is 7, he was fascinated with everything, and at one point said, this is like a history field trip, he saw various typewriters and had no idea what they were, and the old sewing machines he could not relate to my modern sewing machine.  Around with the bikes were loads of teddy bears to give the younger children something to look for, we were not allowed to touch anything, which was a bit harder with Will. It's not a place I would keep going back to, but well worth a visit.
I love our grandsons, cousins having so much fun together, they do live over 100 miles apart, but see each other often enough, to play together. It's a bit sad now because  hubby's oldest son is on the ferry back to Dublin.
Today Will is here, he is having his nap, so once he wakes up we will walk to the park for play time.
Published Poppypatchwork at 11:38
Topics Day out, Family, Weekend