I have done the marzipan layer on daughters cake, our cake had another drink of brandy, as usual I used the best brandy for the cake, poor hubby shakes his head every year, but he does love my Christmas cake. 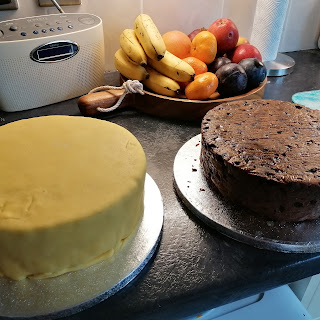 Another great book, this being my 73rd book read this year, as always with this author, I loved this story line, it was very different, an interesting look on how we can change if things around us change. 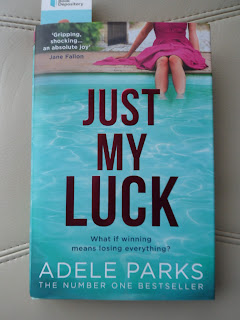 It's very comfortable to have old friends out this season, George loves Rudolf and has chewed his ear, I have loads of these handmade by me cushions of all sizes. 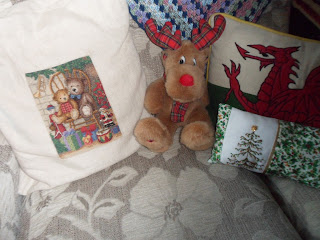 My Lidi Amaryllis is growing well, but only leaves, last years bulb has only produced leaves this year, my expensive bulb is simply not growing, probably won't have any flowers this season. 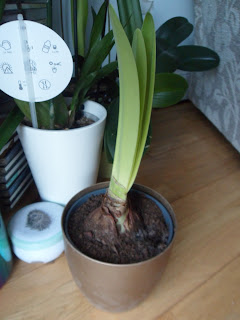 We had Will and George on Sunday for an hour, mummy had a hospital appointment and daddy was unwell in bed, so we took care of the boys, Will loved our Christmas tree, but spend most of the time in the garage with Grancha, boys like to stick together. It was unexpected to see the boys, but I will never see any of our families struggle with childcare.
My computer is fixed, not cheap, but he retrieved all my data, which I am very pleased with, I have backed up a couple of things, one being my stash list, which I started in 2015.
I don't have much Christmas spirt, to be honest I am struggling, I know I'm not alone, I think this festive season is going to be hard, with the announcement of so many retail shops, within just 2 groups to be in administration, with the huge number of people who already have lost their jobs, so many people facing a bleak future, most of our companies survive each year on a good Christmas season, which is gone before it could start,  how can it be a merry time. I am also worried about a personal issue, one which will effect every bit of our lives but one I can't control, it mad to be worried, but it's how I am, December has not had a good start.
Published Poppypatchwork at 10:09 3 comments:
Topics Amaryllis, Baking, books, Christmas

I have not purchased any yarn this month, I have plenty in my stash and I have projects in mind, I have my cross stitch out, but again I have enough in my stash to not require anything. I did have 1 order for glass, I have been making tree decorations. Very little spent in the garden.

Our heating is on timed, and we are not using it too much in the day, we do not have a central fire in our sitting room, so if it is cold we have to turn on the household heating. We spend more time in our sunny office each morning, it's always warm in there.

Food shopping is much the same, still expensive, we have purchased our Christmas Turkey crown and a big joint of beef, both are in the freezer, which is full, most of the Christmas treats are got, we are expected to be at our daughters on Christmas eve for a sleep over, we are providing the Christmas dinner.

No waste this month again, we make enough veg soups and keep my worms fed with the peelings, they provide the best compost, which I use each spring. We are fully using our new fruit and veg shop, we do not use any of their paper-bags,  and we have started taking our own containers for dried items. Purchasing other things online has left us with more packaging, but so far most of it is cardboard and therefore can be recycled.

The best news is we have planning permission for our pergola, which stated no appeal allowed, very pleasing for both of us, no doubt there will be more from the neighbours, sadly we heard the mother has passed away in our local hospital. Just the daughter living there, we wait for the next chapter, at the moment the mother's dog is howling through out the day we will do nothing about it out of respect.

Not what I wanted to see when turning on my computer, the system did not fix itself and our 'computer expert' thinks its the hard drive, so he will work on it, to see if he can retrieve my data, but it's going to cost, now I'm blogging on my phone, my ipad is not so easy to blog from. 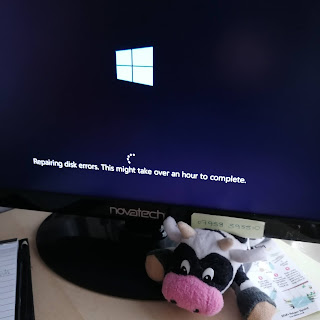 I have put the decorations up, I've never done this in November before, but I do feel the house looks more inviting, I have also been using candles most evenings. Youngest daughter got me a lovely Christmas spicy candle, which I am loving. 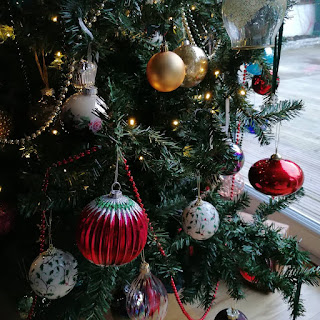 We are looking forward to having a few more local shops open in our village next week, we don't need to go into town.
With the new rules we have a pleasing change, the rules state any family with a disabled child under 5 years can form a support with 1 other family, so daughter has chosen us, so we will be able to see daughter, Will and George in our home, I'm pleased to be able to give support.
Our plans are to stay home as much as we can, so we can go to daughters home for Christmas, her MIL is away, so it will just be 2 families. I don't see the next 4 weeks as a trial, it's given us time to keep safe, stay away from the virus and keep well for mixing families.
November has rushed by, we are daily doing as much as we can, we walk every dry day, we both enjoy a stroll in our local park, there is nothing to do in the garden, but I do wander around it most days.
I'm not doing much craft, I do hope to finish a project for George and pack away my sewing machine, I seem able to sit and do nothing for the last couple of afternoons. I have watched a couple episodes of The Crown, I'm not sure if I am comfortable watching this series, I still feel strongly about how Lady Di was treated, and being a drama, how they tell the story, the Internet is full of articles from the show and opinions.
Published Poppypatchwork at 10:53 10 comments:

Back in mid November, I decided it was time to bring this project back out, it had been in my WIP box for a couple of years, I still had all the threads stored with the design, so it was just a case of stitching it again, in hope to be able to have it finished and on show this Christmas season. 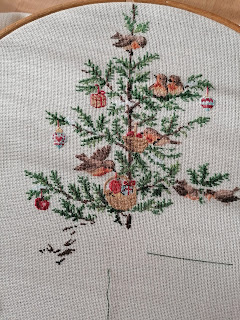 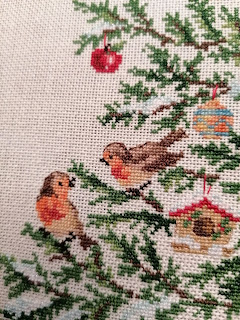 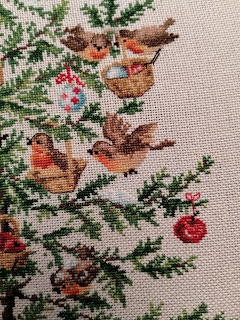 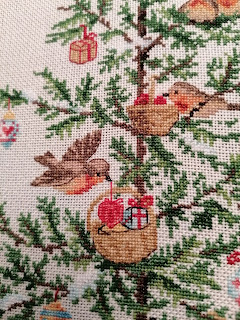 As promised to myself, this bigger bird was the last part I stitched, the shades and colours bring these birds alive as I stitched them, the designer has made wonderful images. 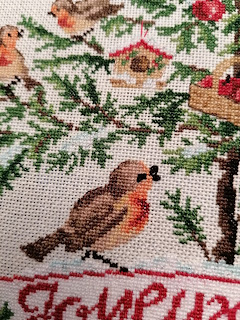 In another add on, I decided I would like the snow to shine, so I used some sliver sewing machine thread, which I separated, and stitched at random, I'm pleased it just give the snow a lift. I'm not sure if you can see it, but it does glimmer in daylight. 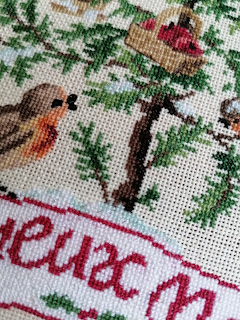 The pin in my fabric shows where I left the needle before it was packed away, the needle left a rust mark, I thought it would far enough away to not matter, but my decision to make a cushion, needed a bigger square area and the rust spot was a problem. 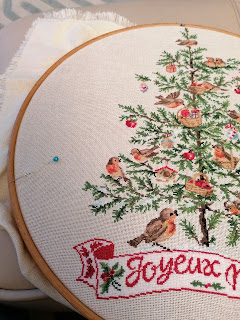 So a plan was needed, I simply stitched the flying bird over the mark and to balance the look, I stitched the same flying bird on the other side, so now this is finished. It was stitched on 28 count evenweave, using 1 strand of DMC thread. 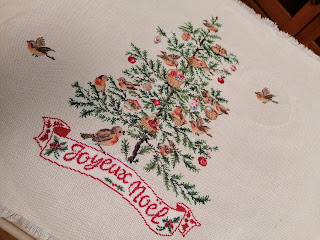 It took very little time to make a new cushion inner and the cover with the tartan fabric I had in my stash, I think it goes well, originally I was going to use plain red, but then I saw the fabric in my stash and knew it would suit. I did want an edging on this cushion, so when our local shop reopens next week I will find a nice braid to stitch around the seams. I did pop a cotton lining behind my stitching to help it keep it's shape. 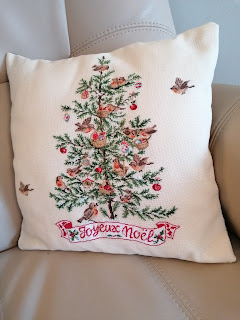 End of the story, not quiet, I cut all the bits out, decided to make the bottom differently so when I stitch it together I'm stitching on 2 layers of cotton, so lay it out, then I hemmed the lower small flap popped it back in and stitched around twice, turned it the right way and yes, its wrong, I have left it, trying to unpick 2 rows of matching stitching from my stitching canvas would not go well. So there we are, its finished, not right but it's done. 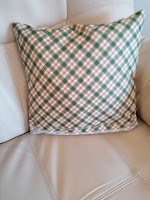 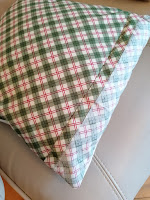 I have used loads from my stash this year, I have one other small project almost completed, I will post next time, it's fun to be able to look and use what I already have. I have pulled out another cross stitch WIP to work on, but I won't being doing it day and night, I am heading back to my knitting needles and the jackets for Will and George.
I am still using my sewing machine, the simple project I was making for George has grown, it will be finished by Sunday, I just hope it looks as good as I see it in my mind.
Published Poppypatchwork at 09:15 9 comments:
Topics Cross Stitch, Finished, Sewing, Torchon O Christmas Tree
Older Posts Home
Subscribe to: Posts (Atom)