I added loads of soil and food to this bed, which has raised the level and hopefully given new life here, my aim is a cottage garden, I have marigolds for along the front in the greenhouse, they are still a bit small for now. I love the look of my chimney pot at the end, the fuchsia is getting bigger and should tumble over the side. 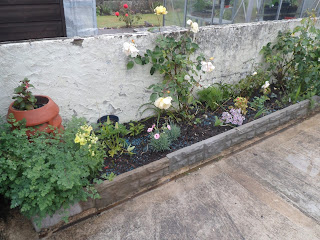 Most of the plants I have added have been passed on to me or swapped, we have a few good growers in work, I sprinkle loads of seeds here last month, there are seedling coming through, mainly at the back of the plot. 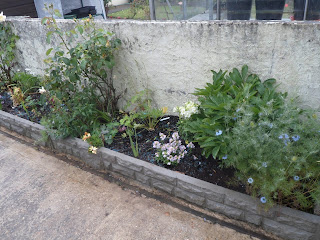 This is a new view, from the green house, these side panels are not glass but perspex, they form the curve from the side to the roof. I have a few jobs to do in here today, whilst the rain falls. 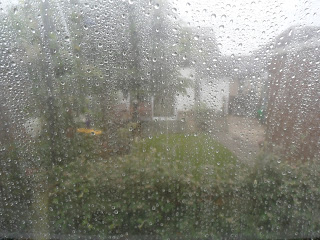 My main job is to re-pot these seven Orchids, I've had the compost for ages. 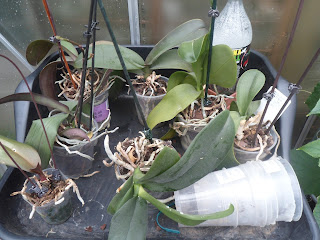 My cucumber has grown loads in the past week, here taken last weekend, shown in the last photo, it has grown at least 14" and I now have 2 cucumbers forming, I am really pleased already with the progress of the contents of this green house. 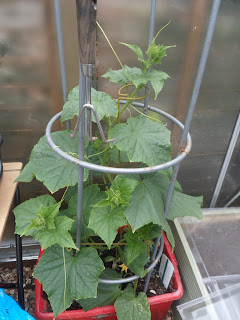 I has rained loads in the night, which was promised, so all my little gardens (plus Win's) have had a good soaking, we have has one quick storm since I have been up, it's stopped now, but it's not clearing up at all. It is a pity for hubby sake, he is our on his motorbike with his son's they are doing 'The Ride of Respect' together for the first time.
I have been home alone this weekend, it's been busy, after gardening I had lunch out with youngest daughter yesterday, catching up on gossip which was fun. Later a friend popped in and we had a lovely hour in my garden drinking coffee and loads of chatter. After I finished pottering in the garden until about 7.30pm,  I watched on catch up Chelsea Flower Show, for 90 minutes and then read my book. This morning after a lazy lie in again reading my book, I have housework to do, then I will be in the greenhouse.
This evening I will make a meal for hubby when he gets in, already I have made a Spanish omelet.
Can anyone tell me why my post after I press publish is being delayed for on average 8 hours.
Published Poppypatchwork at 11:03
Topics Flowers, Garden, Greenhouse, Orchids, Swap, Weekend