My spend for the first two months
it's a very pleasing start to this year,
the figures in red are the savings I have made on last years spend

I am on track with 52 things in 2016 at the end of the second month
We had the car cleaned whilst we were shopping.
My nails are looking better, they have polish on all the time.
I have also worked on my 2015 book, it's a long task.
TV is off at least once a week, and
reading is good, thank you to those who have suggested different authors.
I've made a start on my quilting
We are now happy having one or two meat free meals a week
and sitting at the table for each meal 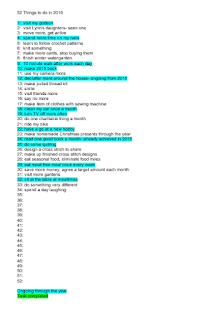 The item I am struggling with is do one charitable thing a month, number 20, last month was just giving some nice stuff to a charity shop, not what I had in mind when I added it to the list, but this time of year is not the best to do things.
Hubby is getting bored being in the house so much, we had a few words last week, he wanted to go to Waitrose, he required a couple packs of herbs and was going to use our £50 of vouchers, which meant he would pop loads of things into his basket, because he would not have to pay for them. He did not go shopping and we still have the vouchers, we can use them in March when we will need a real shop. I have got him to agree to record all household and food spending, marking how much is spent each visit we make and to keep the receipts, so at the end of March, we can elevate our spending. I sometimes wonder if he thinks I have lost the plot, but I am determined we set our spend to a place where we can have a decent lifestyle and not break the bank. I have always had a well paid second income, and for years we spent most of it, now with reduced income, I still want to be able to save a bit each month, just in case.
Every thing went well at daughter's wedding venue, we spoke to those involved and every thing is on track. I also tried on both dresses purchased on Saturday and now find myself favoring the shades of blue dress, I have seen a nice jacket on the net and have ordered one, should arrive later this week.
I'm off now to do my hexagons, I did not get time to stitch the one's I cut out at the weekend. I did not do any craft Saturday night, we opened the bubbly and had an enjoyable night watching the film 'Sebastian and Belle'