I am truly enjoying this stitching, each little dot comes alive when filled with loads of french knots., I have one colour to purchase, it's the bluey green, I have also ran out of 3 other shades, so a trip to the shops is planned. 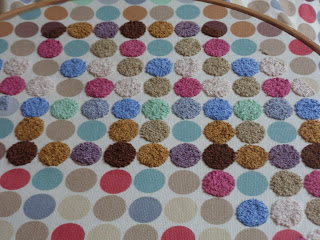 Looking at the back, this shows just how many dots I have finished, I am about half way through. I was worried when I started this it would become a much bigger job and I would find the scale hard. BUT I am enjoying each tiny dot, I know exactly how I will make this into a bag for myself, it won't be a shopper. 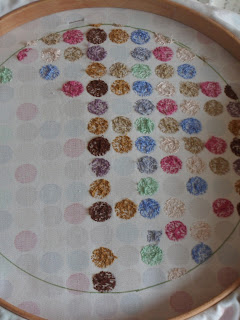 Will made hubby a card. 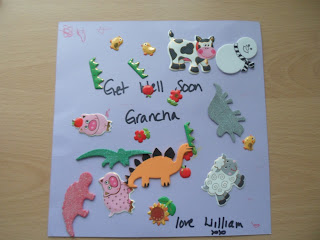 My week already has completely changed, Monday hubby was unwell all day, after speaking to our doctors, they suggested painkillers for the pain in his tummy, even though he told them it was much worse than expected for a tummy bug. Tuesday after a very poor night's sleep, he wanted to call doctors again, I suggested he call 111, I was worried because he was still being sick, his heart medication would not be going into his system, they sent an ambulance, and he went to accident and emergency department. The department was full after having a busy night, people were waiting for beds to become available in the hospital, we saw a doctor within 2 hours, who after test, confirmed he has Pancreatitis, caused by tiny gallstones, which had been causing the pains in his tummy. Once he was admitted to the surgical ward, they confirmed he would need an operation to remove his gallbladder. Operation is booked for tomorrow, providing the blood thinners he takes for his heart condition are not showing in his blood test.
So I am visiting him each day in hospital, it's our local hospital, so just a quick bus journey, it's cheaper than parking the car, he is no where as ill as last October, but it is hard to see my strong hubby in pain, youngest daughter and I visited this morning, he was very tired, so I will pop back later to ensure he's OK, he now has his Ipad with books to read, which will help pass the time. he already looks much better than he did earlier this week.
So my trip to Somerset is cancelled, I have put all our stuff back in the dining and sitting rooms, no decorating anytime soon.
Published Poppypatchwork at 15:30
Topics Sewing