I did read this book, a light plot, which was guessed at each stage and of course the happy ending. I took the books back to the library on Monday. I had not intended on getting any more books but did manage to find 2 to read. 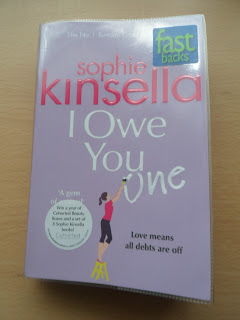 I'm having the best year for soft fruits, they love all the rain and just enough sun to turn them sweet. The blackberries now grow along the side wall of the garage, I am also training them around an arch in front of my shed. The raspberries are still giving me loads, both are having a bumper year. 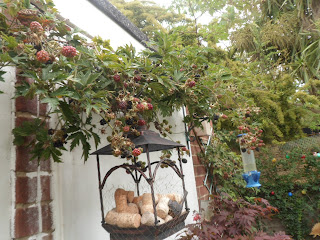 Hubby was not allowed home for the whole weekend, they were worried if his bed was empty, it would be filled and he would lose his place, so a compromise was done, Saturday he came home after lunch until after 8pm, he was back in time to have all his vitals checked and his medication. Sunday he was home between 10am and 8pm, he went back early, he was not feeling so good, tired. Youngest daughter and Will popped in for an hour in the morning, Will had been asking to see Grancha, he was so lovely, kept saying Grancha is poorly and the doctors are going to fix him.
Our local Portsmouth hospital is so full at this time, as soon as a bed becomes empty, the nurses clean it and a new patient comes in, it's never ending, I do feel for the staff who all work so very hard
Hubby should have his gallbladder removed tomorrow, he is on the list, fingers crossed he is not removed, it does happen often, his liver is settling enough for them to operate, we now understand the issues back in October when hubby had to wait for his heart surgery, we think we're the start of these issues, but the symptoms were not enough to be diagnosed at the time.
I managed some time in the garden on Monday, the fore caste was for dry weather, I did get caught in one heavy storm, all the dead heading is done and leaves and twigs collected, the recent windy days has bashed our Magnolia tree.
No sewing , or any other crafting, I did watch The Handmaids Tale on Sunday, which this week I enjoyed.
This morning I am going out, I will purchase the silks (floss), to finish my dots, plus a quick pop to Tesco.
Published Poppypatchwork at 09:58
Topics books, Family, Fruit, Garden