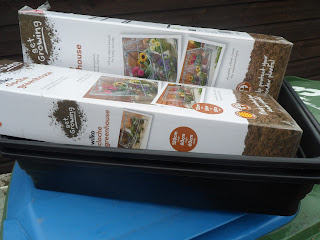 We popped to town this morning first time in weeks, just a couple things needed, I have got a couple of plastic cloche, these were half price and good for early starting of seeds next year, I can place them on my raised garden  in the greenhouse and get ahead, at £5 each they won't break the bank and they store small. The big plastic trays, without drainage holes were reduced from £4 to £1.50 so I got the last two, these will fit inside the cloches allowing space for loads of seed trays. .
We had a great time at the BBQ last night, the host had his whole family there, plus other people who help out with the mini bus driving, hubby does 2 or 3 shifts a week. I wore my body warmer for most of the time, later they lit a fire in a huge oil drum, which kept us warm, we had loads of sparklers and loads of twinkly lights around the fences. I love the way we can sit outside in the cool air and still enjoy each others company.
I was really pleased with the rain this morning, the gardens were drying out so the water was much needed, saves me having to water later. So nothing to do outside, just enjoy the view. I do have a bit of ironing to do later, but not until after the Gentleman's Tennis Final from Wimbledon, and of course we want Andy Murray to win. We won't watch the football final tonight, hubby only watched because Wales did so well.
For lunch I'm having cheese and cucumber sandwiches, home grown of course, I am picking fresh cucumbers 3 times a week and enjoying them, just need the tomato's to catch up.
Later we are going to make a green Thai curry for our main meal, tomorrow we have fishcakes, we got them on a yellow sticker this morning.
One question, if I want new potatoes for Christmas dinner, grown in our raised bed in the greenhouse, when should I plant them, I've never tried to grow out of season before.
Published Poppypatchwork at 13:15
Topics Bargains, Garden, Harvest