I have been stitching another Tiger rug, just because I love this design, only have one back leg to go.
I am still so frustrated with Winter Watergarden, I really do not like stitching 1 over 2 on linen, but I am not going to let it beat me.
I normally change the fabric from linen, but because there are beads, I followed instructions from the designer. 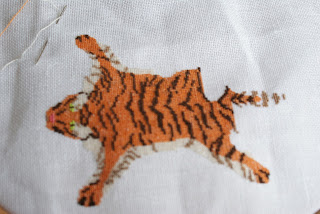 I want to do another quickie, I have a friend moving in a few weeks, all I have to do is decide which door to stitch for her card, at the moment I am looking at the red door, 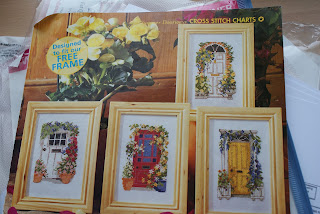 The plants in my green houses are doing well, our summer this week is hazy days, with not to much sun shine, it is warm, but still feels cool at night, at least it is not raining. 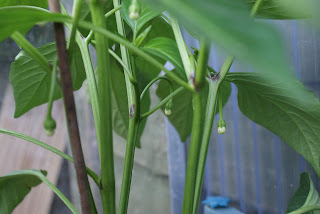 Above green peppers forming, and below the first of my tomato's, Sammy wanted to eat it, but he is waiting for it to go red. My herb garden is giving me loads, and making our cooking taste so much better.
All the ripe strawberries have gone again, I don't have to worry about the birds, grandsons raid every time they visit. 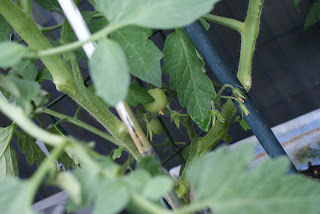 On Tuesday I had Sammy for the day, he walks around always with his hands in his pockets, and he loves his Grancha, they spent loads of time in their garage. Since his hair cut, he looks so grown up, he is going to be a tall lad. 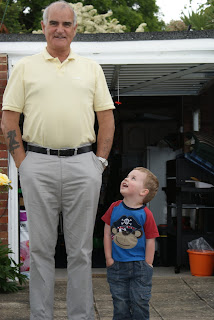 Every where he goes he has cars, loads of cars, later when Josh came home from school we played football, both boys walked to the local shops and had a new football each, my poor garden! 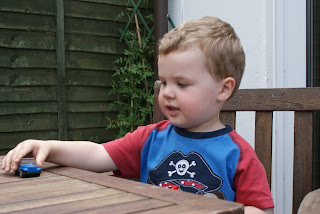 Purdy is on patrol, she loves to sit inside watching the garden, she does not go to far in the day time, so this is her patch, the birds are too quick for her, later she will sleep in a warm spot out side. 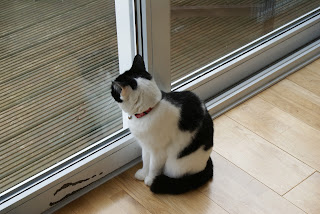 I am watching tennis from Wimbledon, it is great to have time, another fantastic day yesterday, so much excitement in just 3 days, the TV is on all afternoon and evening.